As I announced, I got a Raspberry Pi 2 Model B and although I did not get much time to play yet with it, it was just an excuse to get back to programming and a little computer science fun.

Anyway, I’ve installed Raspbian on it and did a few configurations which I think are worthy to share with others. I’m not going to describe a step-by-step to install a Linux distribution on your Pi, I recommend trying NOOBS and check the good documentation from the Raspberry Pi Foundation. With this setup you can choose during the installation process which Linux distribution to install.

That’s what I did as a warm-up and a quick way to get an up-and-running Pi.

Note that the Raspberry Pi 2 has a new CPU (ARMv7) which is not yet fully exploited by most distribution targeted at the Raspberry Pi ecosystem (with the exception of the Linux kernel). There is one exception: Snappy Ubuntu Core but it is yet alpha. However it should be possible to install most standard Linux distribution that are supporting ARMv7 instructions set, however this is an interesting exercise which I did not perform (yet).

Anyway, using the NOOBS installation or any of the images provided for SD Card has several implication in terms of security. Here is what I recommend to do after the first boot.

And enter and then confirm the password you want to use.

With Raspbian, the `pi’ user has administrator’s rights. You can call sudo to perform system changes. If you are comfortable with that, then simply lock the root account:

Or if you simply want to give a password of your own and use root:

I am preparing a more detail article on this topic, so for now I am only going to give some background and the commands to increase the sources of entropy. Entropy is important, you need sufficient entropy (which your Linux kernel can gather for you) to be able to generate good pseudo-random numbers. Those numbers are used by many cryptographic services, such as generating SSH keys or SSL/TLS certificates.

The problem with embedded devices such as the Raspberry Pi (especially if you run it headless like I do) is that there aren’t many sources of entropy available to the kernel, especially at boot time.

The Raspberry Pi has an integrated hardware random number generator (HW RNG) which Linux can use to feed its entropy pool. The implication of using such HW RNG is debatable and I will discuss it in the coming article. But here is how to activate it.

Raspbian based on Debian Jessie: At the time of writing, if you install Raspbian via the NOOBS tool or by simply flashing Raspbian on a SDcard, you get it based on Debian 7 also known as Wheezy. Therefore, I only present here the steps to configure the HW RNG as a source for the Linux kernel entropy pool for this target: Debian Wheezy. If you found this article and have already upgraded Raspbian to a newer Debian base, then check my newer post about getting more entropy on Raspbian based on Debian 8 Jessie.

If it worked a new device should be now available /dev/hwrng and the following should be visible in the system messages:

Note on Broadcom SoC naming: The System-on-a-Chip (SoC) family from Broadcom and used in the Raspberry Pi 1 models is called BCM2835. Within this family, only one CPU is able to run Linux and is powering all those Raspberry Pi models, it is called the BCM2708. The Raspberry Pi 2 is equipped with a SoC from the BCM2836 family is the specific BCM2709 CPU model.

To make the change permanent, on any Linux system you simply load the module in the /etc/modules file by adding a new line with bcm2708_rng (see next command). Or you can use the Raspberry Pi firmware Device Tree (DT) overlays (see below).

Now install the rng-tools (the service should be automatically activated and started, default configuration is fine, but you can tweak/amend it in /etc/default/rng-tools)

After awhile you can check the level of entropy in your pool and some stats on the rng-tools service:

I run my Pi headless for the moment. So after the first boot, I went into the advanced configuration of the raspi-config and activated SSH daemon. I’m not here going to describe how to properly secure the SSHd daemon, which can be a topic for a future article. I’m only going to focus on one topic which is SSH host keys.

SSH host keys are the means for a user connecting to a remote server to verify the authenticity of the server. That the sort of message you see the first time you connect to an SSH server:

If an attacker tries to spoof your SSH server, on connection you will get this message:

So this is all good, but the problem with these host keys is that you cannot really trust the one installed by default. They could be the same as the one from the image you downloaded and flashed on your SD Card, and so would be similar to all other persons installing the same image. Another problem is that they could have been generated at a point in the installation where not enough entropy was gathered by the kernel to be able to provide non-predictable random numbers. Therefore someone could use this to generate new host keys that would match the one on your Raspberry Pi.

Now that in the earlier chapter we added good source to feed the entropy pool, we can regenerate better host keys. First get rid off the previous ones:

Then generate new ones with one of the 3 possibilities:

Now if you want to print the fingerprint of any of your host keys to make sure of the authenticity of the server you are connecting to (should only be needed the first time your client connects to your server):

I love programming! And because I do it less and less at work, I felt the need to do something about it.

I was looking for a project to help when I read the news about the new Raspberry Pi. And it took me only a couple of days to realise that was it, so I ordered it online and just received it. 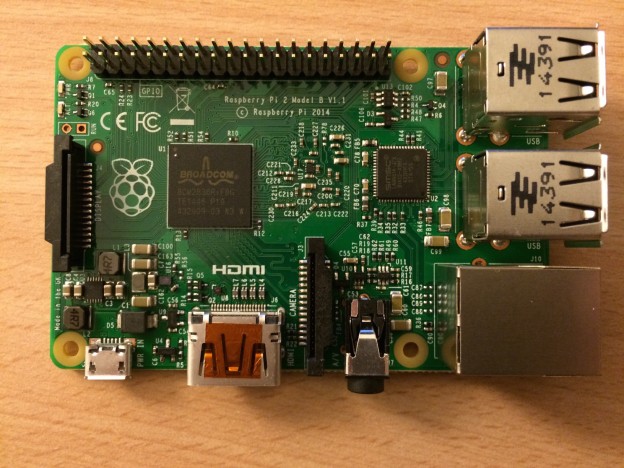 A beautiful little device with enough connectivity and power to have some fun!

I did not have much time yet to play with it, I was able to install Raspbian on it and that’s it. But I’m quite happy about my decision and I’m looking forward for the projects I plan with it (I’m hesitating between creating a weather station together with a small Arduino board as the “sensor”, or perhaps starting with something less ambitious maybe related to home automation).